To defund or not to defund? | Campaigners call for BBC's licence fee to be scrapped

Derek Royden (2020-02-01). First Assange, now Greenwald: The growing attacks on adversarial journalism. nationofchange.org It's unlikely that Greenwald, who at least has the benefit of widespread fame and international support, will be the last journalist to be targeted.

WSWS (2020-02-01). Montreal meeting this Sunday to demand freedom for Julian Assange. wsws.org The Socialist Equality Party (Canada) is holding a public meeting in Montreal this Sunday, to fight for the freedom of Wikileaks founder Julian Assange, oppose war, and defend democratic rights.

WSWS (2020-02-01). Assange would be held in "darkest corner of the prison system" if extradited to the US. wsws.org If dispatched to the US, the WikiLeaks founder will be held in extreme isolation—conditions usually inflicted on individuals convicted of terrorism offences.

John Bruce Jessen tells a military court that such techniques as waterboarding and sleep deprivation were shown to have no lasting effects. 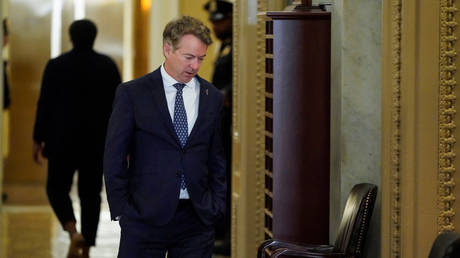 As Senators gathered for the last day of questioning in President Trump's impeachment trial, Kentucky Senator Rand Paul found his question censored in a way that may have revealed the identity of the mysterious whistleblower. | With the impeachment trial of President Donald Trump nearing its final stages, senators gathered on Capitol Hill on Thursday to question the Democratic prosecution team, and Trump's defense attorneys. However, Paul (R-Kentucky) found his question shot down by presiding Chief Justice John Roberts, who declined "to read the question as submitted." | Paul left the chamber after Roberts' de…

Julian Assange Lawyer: What's at Stake in Extradition Case Is Freedom of the Press

ICE Agents Are Sterilizing Women Against Their Will

Prof. Richard Wolff On Reopening Schools During A Pandemic

Senate Votes NO on Stimulus

Prof. Wolff: Is This the Eve of Destruction?

Posted by The Zero Hour with RJ Eskow.

This site is produced by you and me.    Thanks for visiting.